How to Make a Stencil in CorelDraw 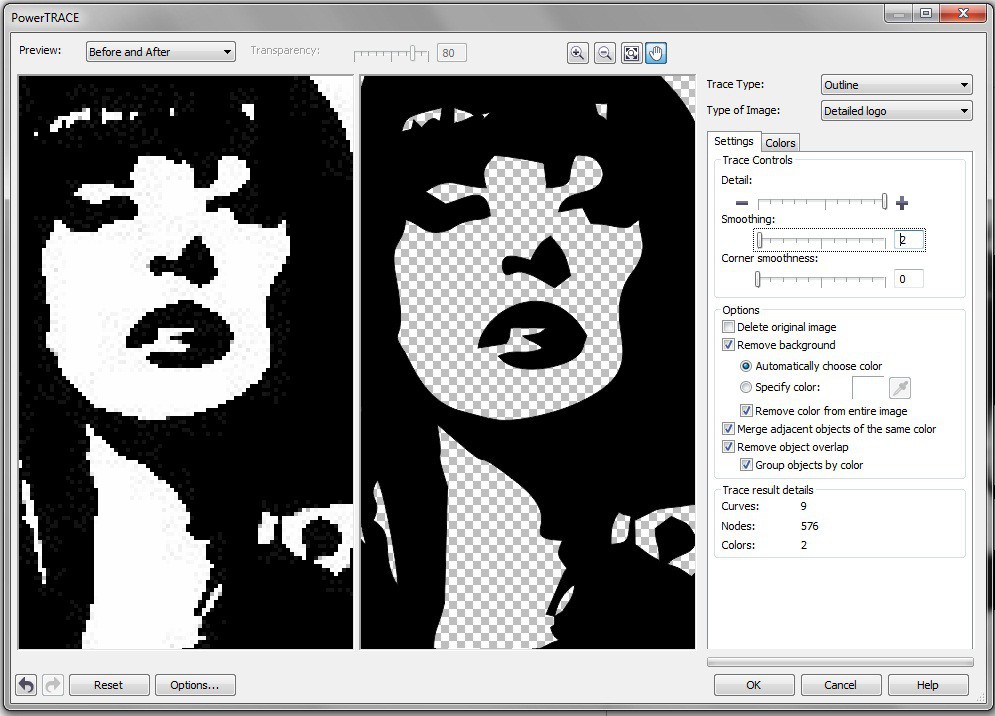 Stencils became part of our everyday airbrush artistic work and many people are asking for some instructions on how to make a stencil. I’ve asked at many places “What final format would you prefer for a stencil” if you want to print it yourself on a printer or perhaps if you have access to a plotter, which is better option when it comes to cutting out the stencil and you can make stencil with much better details.


Most votes I got were for CorelDraw. That’s why I decided that it is time to make a tutorial on “How To Make a Stencil in CorelDraw“.

I was hoping more people will vote for Corel. Another option was Photoshop, but Photoshop is a bitmap editor and when it comes to cutting it on plotter that’s the worst option you can have. To make an ideal stencil you need a vector editor.

There is an option by Adobe called Illustrator that works with vectors and even Photoshop these days has some vector tools. But I’m not very familiar with this tools so let’s not complicate life. CorelDraw was the people’s choice and I’m going to show how it’s done.


This is the easy way to make a stencil. I will show you more advanced way. Well, if we want to make the stencil of a photo you need to use a bitmap editor first to prepare it for a vector editor. Which one you’re going to use, doesn’t matter as CorelPhotoPaint, Photoshop or maybe Gimp have similar tools (they just may be under different menu or called slightly different name). Even though I have said we need CorelDraw because it is a vector editor, most of the steps are done in bitmap editor.

BTW, if on your computer, pictures in this tutorial look blurred, click on them :)

I’m going to stay with Corel for the process (Corel has bitmap editor too). As image I’m going to use a photo of Milla Jovovich (she is not just a good actress but good singer and fine model ;)). 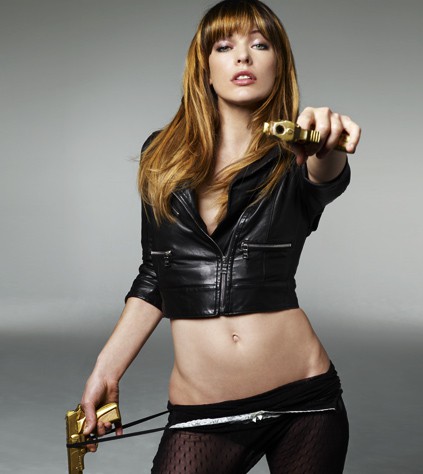 So open your image in CorelPhotoPaint and head to Menu > Adjust > Contrast Enhancement (Levels in older version). If our picture has low contrast and misses the Black and White, this will help us to set the colours in full range from black to white. 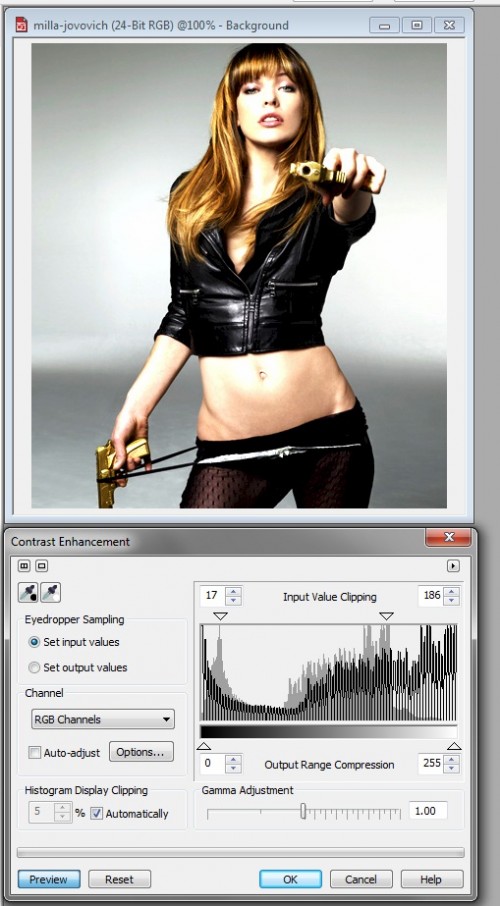 Desaturation can be easy if you just use Desaturate tool but we can use something better that can help not just desaturate the photo but also raise some of colour levels.

So, we use Menu > Adjust > Chanel Mixer. Actually we need to set RGB the right way. For every picture it is going to be different depending on colorization. In this case I would say the red channel dominates. The green channel is not important at all and blue channel gives our picture a good contrast. Actually, if we don’t want to over expose the picture, the sum of channels has to be 100 (R30, G0, B70). But for our case exposure is good so we set R50, G0, R100  (sum of 150). 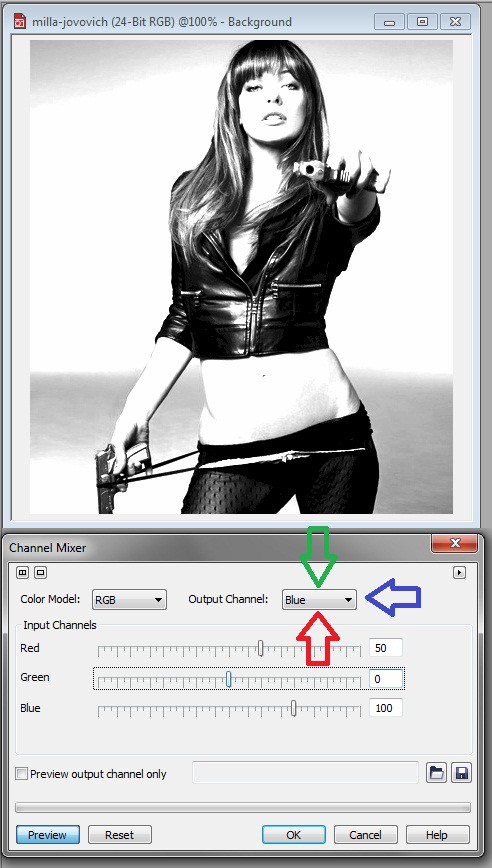 Don’t forget to set these values for every “Output Channel“. If you make the right choice for the levels the output picture will be B&W.

Next step is needed if picture has different local lightness. To fix this we use tool “Local Equalization“. Do not be scared of stains and lower contrast (it is going to be fixed later). But first erase everything you don’t need (I used eraser tool) 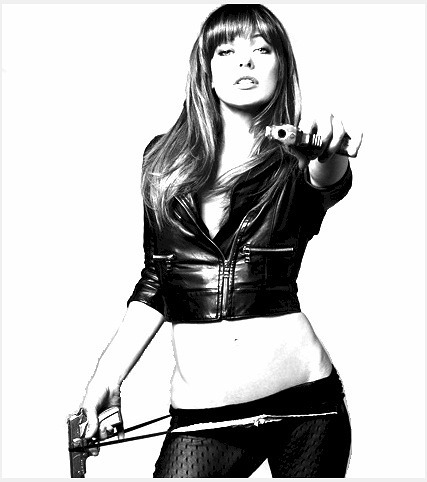 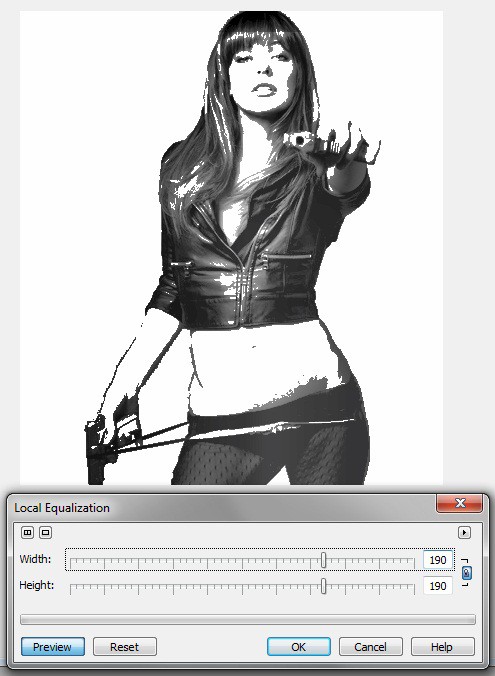 And now we actually start making a stencil using a tool “Brightness/Contrast/Intensity“. Set contrast to max and try to play with brightness. 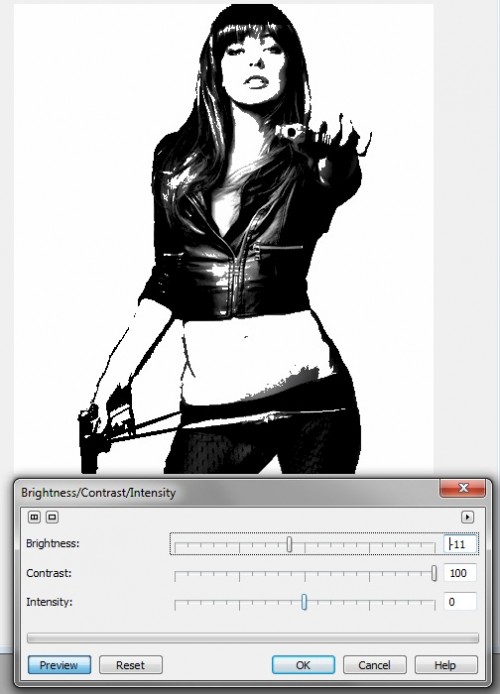 If you have a wish to make edges a bit smoother use Menu > Effects > Blur > Gaussian Blur, and then repeat contrast procedure again and again untill you get really B&W picture. 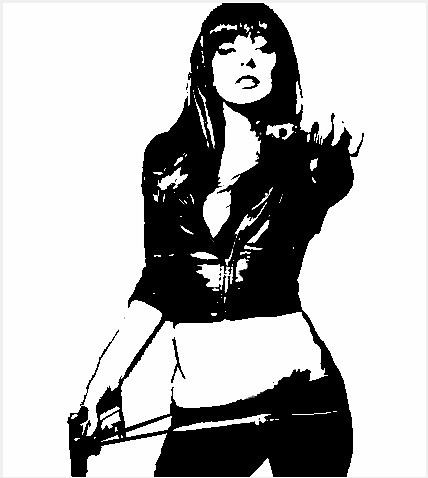 Here comes very important step. By using eraser or brush you have to break some lines and areas. In this particular case, if you need only the positive of the stencil, break all the black (after you cut the black out no whites will fall out as well). Here is my example where I’ve fixed a bit more but I think still not enough, so whites are still too thin and it could be difficult to cut it with your hands on the paper or even for vinyl when you cut it with the plotter (this is just a demonstration). 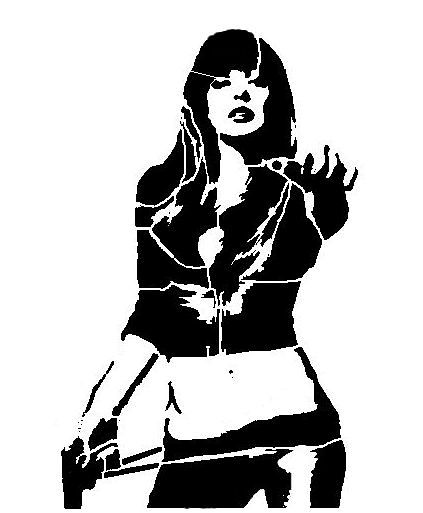 Actually if we don’t have a plotter there is no point to go any further, but if we have then open this image in CorelDraw. As you see I’m almost done and I didn’t even open a vector editor. Well, if you want a bigger stencil then it’s going to be better to convert it to vectors.

When in CorelDraw, go to “File > New.” Then “File > Import”. When you have the picture imported and set for the size of the paper click right mouse button and choose “Outline Trace“. There are more options but it doesn’t matter which one you’ll choose as you will have to change the setting for details anyway.

Go with the setting on the picture. You can see that even with max zoom there is no squares typical for bitmaps. :) 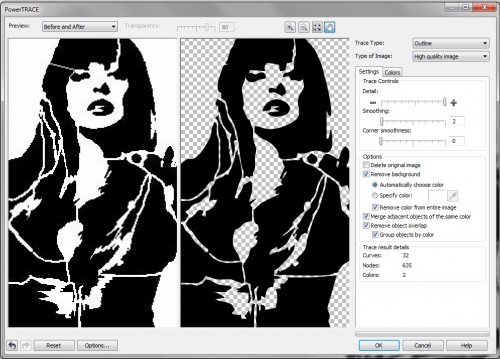 You may, if you want to tick the “delete original image” box, but you don’t have to. In tab colors, switch to B&W. 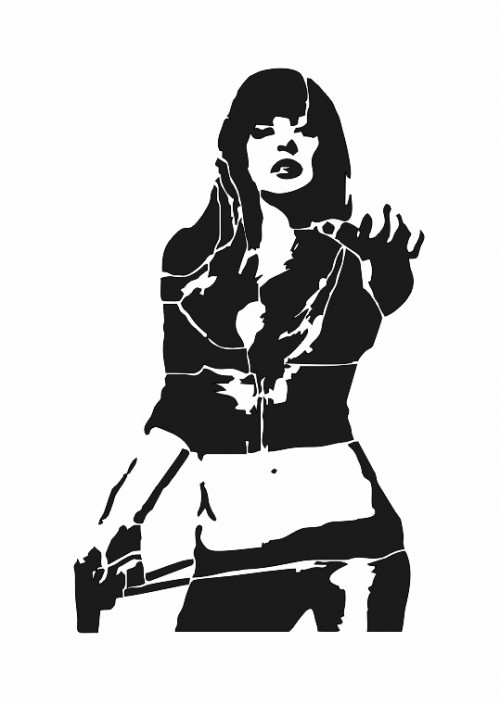 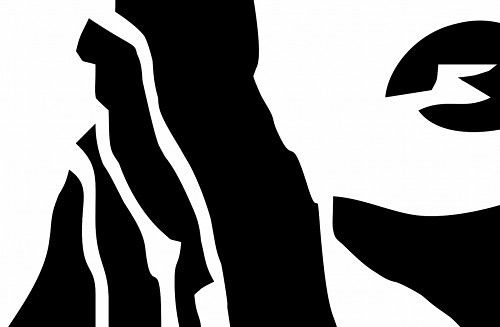 Of course you don’t want to print it with that much black, so click on the image with right mouse button and select “Properties”. Here you can select the width of the lines (I chose 0.1mm) and the fill of the object (I chose white) so, the printer will print (or plotter will cut) the lines only. 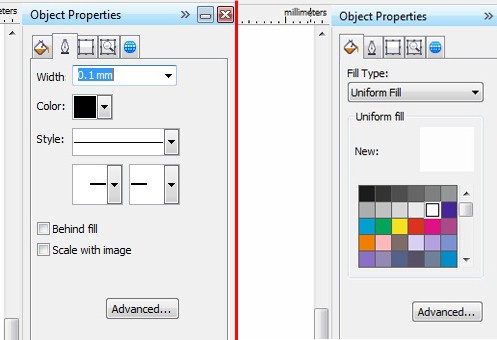 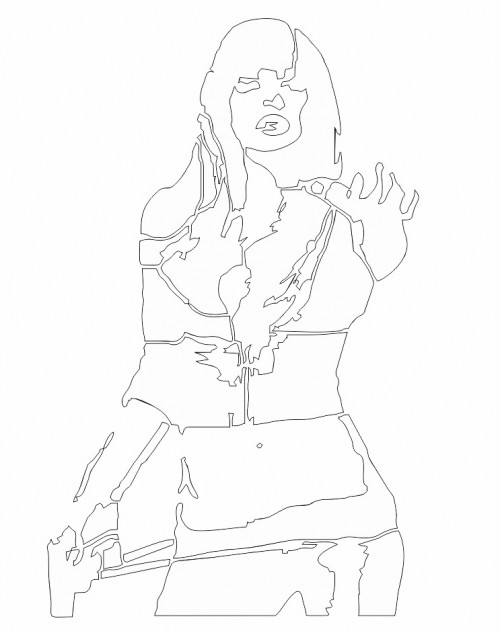 After all, if you want to make your stencil larger, select the background and in left top corner change format from A4 to A1 (for example) and then  just  stretch your image to the size you want. 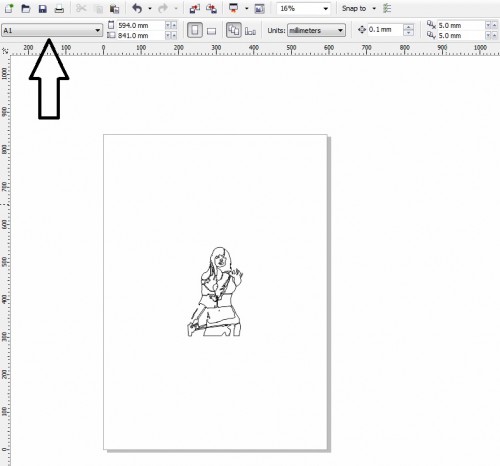 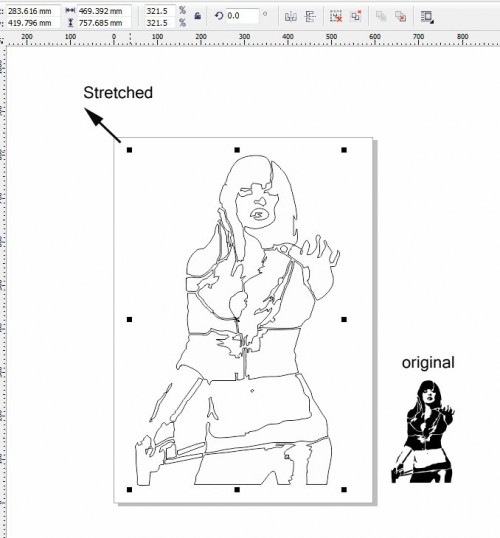 This is it! the only thing when you’re going to print the big stencil on small A4 printer you have to adjust in File > Print some settings 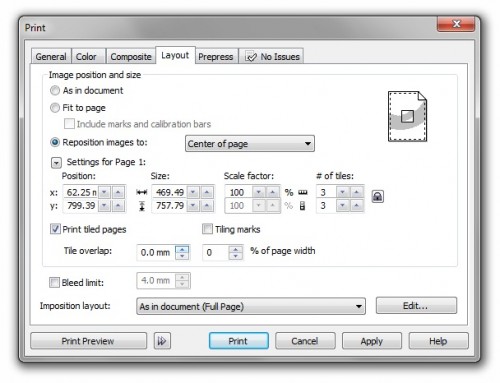 and here is print preview 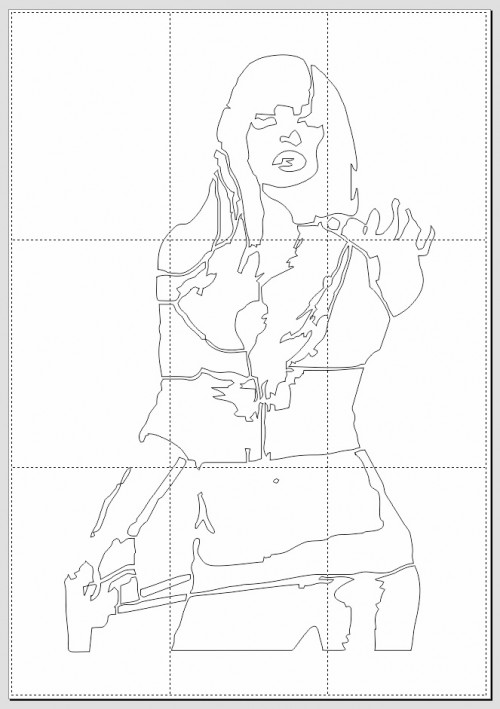 Now we’re done. I hope this tutorial will help you. I just want to point out that I am not a professional in CorelDraw so perhaps there are different ways on how to achieve the same results in this stencil tutorial but I hope that many of you will appreciate my effort I put in this by leaving a short comment.

6 Comments on “How to Make a Stencil in CorelDraw”